The UESPWiki – Your source for The Elder Scrolls since 1995
< Morrowind: Places: Strongholds
Jump to: navigation, search 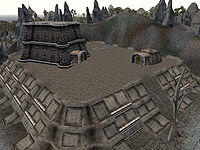 Telasero is the southernmost Dunmer stronghold, which sits northwest of Molag Mar.

It is one of the ancient strongholds of a brighter time for the Dunmer. Telasero is in Molag Amur, east of Suran and in off the coast.

The strongholds seem interesting to the traveler, but should be approached very carefully. They have largely been abandoned, but have since generally proved attractive to whatever group feels strong enough to hold them. At last report, Telasero has been taken over as a Sixth House base.