The UESPWiki – Your source for The Elder Scrolls since 1995
< Oblivion: Places: Mines
Jump to: navigation, search 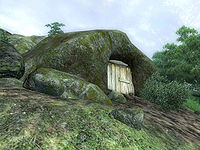 Barren Mine is a small mine between Bravil and Leyawiin containing goblins. It contains only one zone, Barren Mine. 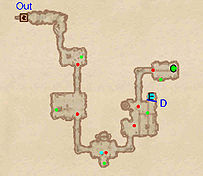 Unlike most other tribes, the nine Dust Eater Goblins have chosen a fairly small and linear cave as their lair. Upon entering, you will quickly encounter a patrolling Goblin guarding a locked chest in the first room; make sure to claim the two lockpicks from the broken crate. Proceed through two similar rooms, and be careful not to let the Goblins group up on you, in particular the Goblin War Chief that tends to patrol the entire cave. Prepare for the second room, because that room contains up to four enemies.

In the large southeastern room, notice the Dead Captive in a locked cell at E, fight the two Goblins and head north for an encounter with the Goblin Shaman. After the fight, search the Shaman's body for the key to the cell at D, claim the Totem Staff and the four soul gems at C, then backtrack all the way back to the exit at Out.