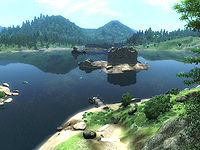 Niben Bay is a large body of water lying in the Nibenay Basin, largely east of the city of Bravil.

It lies across the Niben River, splitting it into two parts, upper and lower, and so is technically a lake rather than a bay, which means that the Khajiit name for the bay, Lake Makapi, is more accurate. In addition, the Larsius River, the Corbolo River, the Silverfish River, and the Panther River all empty into Niben Bay.

In 3E 433 a floating island appeared in the bay, on which a door to the Shivering Isles was opened by Sheogorath in his search for a champion.

From the east side of the bay going south and around, Fort Aurus, Fort Irony, the Ayleid ruin Bawn, Flooded Mine, a Wayshrine of Zenithar, and Veyond Cave all border the bay. Fort Grief Island sits near the mouth of the Silverfish River, while the underwater section of Fathis Aren's Tower can be found far south of the fort.