The UESPWiki – Your source for The Elder Scrolls since 1995
< Oblivion: People / Merchants / Blacksmiths / Trainers
Jump to: navigation, search 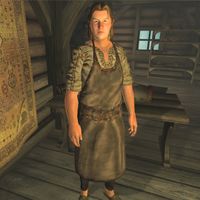 Olfand is a Nord smith and the proprietor of the weaponry store Nord Winds in Bruma. Besides selling weapons and armor, Olfand offers repair services and basic training in Light Armor. His wife, Skjorta, is a clothier selling her wares from Nord Winds as well.

Although his wife's excessive drinking and embarrassing behavior is the talk-of-the-town, Olfand can't be bothered and is rather hardworking, even if he does share his wife's drinking habits to some extent. He wakes up at 6am and after strolling around the basement, he opens the shop at 8am. Olfand then offers his various services till 8pm, then closes up shop and wanders around the main trading room until 10pm. At this time Olfand either sets off to find his wife, Skjorta, or visits Olav's Tap and Tack for two-hour dinner. Then he enjoys his free time till the midnight.

As a smith he wears blacksmith's apron and blacksmith's pants with clogs and also carries a small amount of gold and his shop key.

When you meet him for the first time, he will introduce himself and the Nord habits he shares with his wife: "I'm Olfand, the Light Armor trainer. Skjorta and I run North [sic] Winds. Please excuse us. We had a little drink-up last night. Still a little muzzy." On the subject of Bruma, he will say: "Just like Skyrim, except for all the tight-ass Heartlanders around. All work and chapel... no wonder they're so sour."