The UESPWiki – Your source for The Elder Scrolls since 1995
< Oblivion: Magic / Items
Jump to: navigation, search

Staves are always enchanted and work as ranged weapons (i.e. magic bows); they cannot be used as beating sticks. Once the staff is completely discharged, it becomes unusable (save for blocking) and must be recharged using the same methods as any enchanted weapon, namely a Soul Gem, a Varla Stone, or a recharging service.

This page describes the unique staves found in the game; a separate page (Generic Staves) describes the rest. Almost all staves have 100 health (exceptions are noted below), but generally the only time the health of a staff is relevant is if a Disintegrate Weapon spell is used.

The spelling "Staffs" for the plural is used in-game, e.g. the shop Rindir's Staffs.

This is a custom (and potentially powerful) staff obtained through a quest once you gain entrance to the Arcane University. After finding the wood you need for the staff (named Unfinished Staff) and taking it to the Arcane University, you get to choose what effects you want. You can choose one of three effects from three schools of magic (which gives a total of nine possible effects).

* These Mage's Staves are the only ones in the game that do not have 40 uses. This is caused by the magnitude of the staves' spell not being consistent with its charge.
¹ The charge for this stave should be 960.

² The spell on this stave should be a 20 foot spell lasting 10 seconds, rather than that of the level 5-9 version.

Mankar Camoran's Staff is used by Mankar Camoran, who is encountered during the Main Quest. In appearance, it is identical to a typical staff. 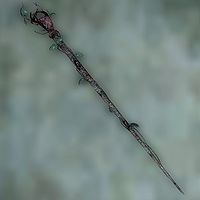 The Staff of Indarys is one of the possible rewards given to you by Count Andel Indarys for completing the quest The Wayward Knight. You get to choose whether to receive this staff or Thornblade.

For full leveled statistics see the Staff of Indarys article. 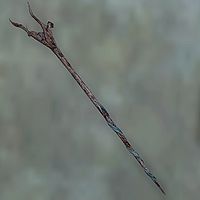 Staff of Nenalata may be found (or destroyed) during the quest Secrets of the Ayleids. In appearance, it is identical to a typical staff.

For full leveled statistics see the Staff of Nenalata article.

These are all of the other unique staves in the game. Generic staves (i.e., those that are found in random loot) are all listed at Generic Staves. Many of these staves have individual articles that provide more details, as indicated by the links in the following table.