The UESPWiki – Your source for The Elder Scrolls since 1995
< Lore: Artifacts: D
Jump to: navigation, search 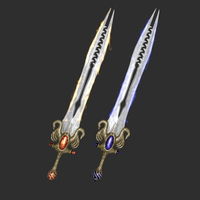 Dawnfang and Duskfang, and their superior variants, Dawnfang Superior and Duskfang Superior, are four forms taken by an evidently sentient Tsaesci "blood drinker" longsword.[1] Two other blades share a similar design, the first being the vampiric Bloodthirst[2], and the second being the frost-enchanted Rimelink. Dawnfang and Duskfang's serpent-like appearance and transformation capabilities are reminiscent to traits that the Tsaesci are rumored to have.[UOL 1] The sword has a sinister purpose: corrupting its wielder, as well as forcing a dependency on them.[3] It also craves the lifeforce and magicka of the victims it slays.[4]

Dawnfang and Duskfang's design is intricate in all its forms, an example being its crossguard and pommel that are adorned with elegant jewels, placed as if to seduce a person into wielding it. More fitting of its nature is its pronged blade that resembles the gaping maw of a beast, and the golden snakeskin pattern that envelops the areas around its crossguard, handle, and pommel. The forms' physical similarities diverge from there thanks to the sword's transformative capabilities. At dawn, the sword becomes Dawnfang, whose jewels become infused with orange flames and burns to those that it strikes. At dusk, the sword becomes Duskfang, and its jewels become infused with blue cold flames, but the pommel's jewel may differ from the rest as its flames can be in either a blue or purple color. Nonetheless, the form freezes those it strikes.[5][6]

The sword's superior forms are achieved by "feeding" the sword after every transformation. It informs its wielder through a mental connection how many lives it must claim before it is satisfied.[1] If twelve enemies are killed with the sword over the twelve-hour period, the next transformation will result in the Superior variant. Dawnfang Superior is engulfed in orange flames around its blade and absorbs the health from those that it strikes, while Duskfang Superior is engulfed in cold flames around its blade and drains enemies of their magicka reserves.[5][2] The sword instantly repairs itself and recharges its enchantments when it transforms. When the sword is not wielded, its jewels turns into a black void-like color, as if inactive and resting.[6]

The sword was originally forged in Akavir by the Tsaesci. It somehow made its way to Tamriel, where it ended up inside a metal box in the depths of the undead-infested Ayleid ruins of Trumbe, in the rugged highlands of the Gold Coast. In 3E 431, the box was looted from the ruins by a small band of adventurers. The sword was then claimed by the Orc warrior Grommok gro-Barak, who is responsible for giving the artifact its various names. Grommok quickly discovered the sword's unusual enchantments, and reported hearing a voice in his head counting each kill he made with the sword.[1]

Following the sword's discovery, the adventurers departed to explore the area around Niben Bay. Around two years later in 3E 433, Sheogorath opened a portal to the Shivering Isles in the center of the bay in search of a mortal champion. The Champion of Cyrodiil entered the realm, earning citizenship by killing the Gatekeeper of the Fringe. Without the Gatekeeper guarding the Gates of Madness, the Isles were left open to sane mortals. It was at this time that the group of adventurers entered the realm. At the command of Sheogorath, the facility of Xedilian was restored to working order, and began to magically attract "unwanted visitors". Grommok's group were the first to fall victim to the restored facility, and all three members were either killed or driven mad by the various traps within. The Champion of Cyrodiil, who oversaw the entire procedure, was then given the artifact after it was taken from Grommok.[7]

The sword was at one point acquired by Lorant Bouchard, an infamous Blades captain who was rumored to be a serpent. The death of his wife Emma,[4] and the sword's influence combined to weigh down on him,[3] causing him to fall further into madness. He begin taking out his suffering on others, and he even began to dabble in necromancy. In 4E 130, the necromancer Sychelle Gatharian hired a group of mages under the guise that they were to capture Lorant for his treachery. Their initial encounter with Lorant failed miserably and they were forced to retreat.[4] They found his experience as a swordsman in combination with his sword, and his ability to resurrect those he killed overwhelming.[8] The mages realized that to defeat him, the best course of action was to somehow separate him from his sword.[4] Sychelle made preparations to fund a second attempt to capture Lorant. She hired a group of smugglers to aid the mages in fulfilling their contract,[9] and revealed her hidden motive to the their boss, Verrick Tilwald. She had in her possession Bloodthirst, and revealed that the capture mission was a front to obtain Dawnfang and Duskfang so that it may be swapped with Bloodthirst. She insisted that he keep the plan secret from the mages, and the deal was sealed with the exchange of a coin. Verrick had other plans however, and plotted to betray his mage allies and employer if they were successful with retrieving Dawnfang and Duskfang. Unfortunately, before he and his associates made the journey to fight Lorant, he lost Bloodthirst within Faldar's Tooth in the Rift.[8]

With their plan finalized, the mages made their move and located Emma's remains. They relocated it to a vault in Riften's Ratways and intended to use it as a lure.[10] Lorant tracked them down and intended to slaughter them for their audacity to disturb his wife, and upon his arrival the mages and smugglers sprung their trap. The mages were successful in separating him from his sword, sealing it behind an impenetrable barrier in the vault's central chamber. Unfortunately, something interfered with the separation spell, and its unintended effect divided Lorant into three different hostile spirits. Several theories of what lead to this unfortunate event emerged. One mage concluded that the spell failed because magic is inheritably unpredictable, [11] while another theorized that the sword may have an ability to interfere with magic.[12] Verrick was the one most to blame. He noted that his incompetence led to Bloodthirst being lost, causing a significant divergence from the plans Sychelle laid out for him.[8] Sensing their imminent demise, the mages worked to binding Lorant into three different areas of the vault, and summoned Emma's spirit in hopes of using her to convince her husband to calm down.[13] The little time they had left allowed them to successfully complete the binding ritual, but at the cost of all but one of them being sealed inside with the vengeful Lorant.[14] As Verrick waited for his demise, he realized that the coin Sychelle had given him had been cursed, perhaps indicating how his greed led to his downfall.[8] Lorant remained within the tomb as its prisoner, and as the guardian for the sword and his wife's remains; all who entered the tomb were killed by him.[3][2]

In 4E 201, the Last Dragonborn investigated Riften's Ratways after hearing rumors of disappearances and ghost sightings. Within the Ratways, The spirit of Lorant's long departed wife, Emma, manifested and guided the Dragonborn through Lorant's chambers. The Dragonborn defeated Lorant's fragments and made him whole, finally freeing him and allowing him to reunite and rest with his wife in the afterlife. With Lorant free, the barrier surrounding Dawnfang and Duskfang was removed, allowing the sword to be retrieved.[2]