This article is about the Ayleid ruin. For information on the Tribunal Temple's High Fane, see Vivec City. 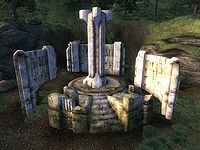 Malada (or the High Fane in Ayleidoon) was an Ayleid temple found in the Nibenay Basin of Cyrodiil, north of Lake Canulus. The ruins are known for their distinctive exterior pillar.

Malada survived the Alessian Rebellion and continued to be inhabited for over one hundred years after the race's downfall. The Ayleids of Malada were said to afflict the land "such that no man could plow, or reap, or seed". On the 5th of First Seed, 1E 393, the sun darkened, and the dismayed Nedes declared that a great event should come about in its wake. They appealed to the Alessian Order for aid against the "devils" of the High Fane, and Abbot Cosmas led an assault on the temple, cleansing it with holy flame. The Ayleids within were burned along with their relics and books. The Cleansing of the Fane was later attributed for many years of peace.[1] The temple later fell into ruin and became infested with undead.[2]

In 3E 433, an Altmer named Umbacanno recruited treasure hunters to locate the High Fane, the Ayleid name of which had been lost to common knowledge. Although posing as a simple antique collector, Umbacanno was an Ayleid Revivalist and sought to recover a specific carving from the ruins in order to gain access to the throne room at Nenalata. Although competition between the rival hunters proved to be an issue, Malada was located and the carved tablet was successfully recovered. Removing it from its resting place caused a small collapse, opening up Malada's Aldmerisel (or "Ancestor's Hall").[2]