The UESPWiki – Your source for The Elder Scrolls since 1995
< Morrowind: Factions
Jump to: navigation, search 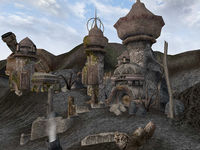 The Berne Clan is a vampire clan led by Raxle Berne based in the Dwemer ruins of Galom Daeus (near a lava lake west of Tel Uvirith, west-northwest of the Erabenimsun Camp). These vampires are the true masters of the night. Sliding through the darkness, invisible in the shadows, they hunt their prey in secrecy and silence. Berne Clan members receive +20 to Agility, additional +20 to Sneak, Unarmored, and Hand-to-hand.

There is also a solitary vampire of the Berne clan named Calvario, who lives in the Nerano Ancestral Tomb (just west of Tel Vos).

The Berne Clan has dialogue unique to its members for certain queries.

"Speak quickly, yearling."
Aundae
"A dark brotherhood of vampiric mages. I fear, though, that their powerful minds may be tainted by madness. Such is the price for the gift they've been given."
Quarra
"They fear nothing, and with good reason. Of all the clans, they are the strongest... at least physically. They are not subtle, and would rather slaughter an entire village than choose a few on which to feed."
Berne
"We are the true masters of the night. Only we use our dark powers as they were intended. Sliding through the night, invisible in the shadows, we hunt our prey in secrecy and silence."
our dark powers
"The Berne vampire travels as the shadows do. Silent, unnoticed. We are more agile than the other clans, and even on crowded streets, we pass unnoticed. Our victims never suspect our presence... until their blood is on our lips."

Berne Clan Cattle also have unique dialogue in the form of a greeting reserved for vampires of their masters' bloodline. When spoken to, they will say:

"Please do not hurt me, dark one."

* Judging from their IDs, these two cattles should be Imperials, but for some reason they are Nord instead.

Clasomo wears a common robe with pants and shoes to match. He has no weapon. He fights using unarmed combat.
Reberio wears a common shirt with pants and shoes to match. He has a long bow in his inventory, and he chooses to use unarmed combat in melee range.
Fammana wears Nordic fur greaves with one matching right bracer, along with a common amulet, pants and shirt. She has an iron longsword to defend herself with.
Ildogesto wears full chitin armor (excluding shoulders) along with common pants, shoes and a common shirt. He wields a chitin shortsword in melee combat. He carries the Key to Galom Daeus in his pocket. He also knows the spells Frost Storm, Fire Storm and Vampire Touch.
Arenara wears a netch leather right pauldron with a matching cuirass and boots. She also wears Nordic fur greaves with a common shirt and a pair of common pants underneath. She has armorer's hammers in her pockets. She wields a chitin shortsword in close combat. She knows the Vampire Touch spell, and uses her Dire Flamebolt Ring to cause fire damage.
Gergio is very fast, will punch you, and wears nothing but a pair of pants.
Germia wears common pants, shoes and a common shirt beneath her boiled netch leather cuirass and Nordic fur right bracer. She has an iron longsword for melee combat and she knows the spells Vampire Touch, Bound Cuirass, Cruel Earwig, Summon Skeletal Minion, Bound Battle Axe and Summon Ancestral Ghost.
Leone wears a common shirt with shoes and pants to match. She throws cruel shardstars in ranged combat and uses her fists in close quarters.
Eloe wears a Nordic fur cuirass, netch leather boots and a left leather bracer over her common pants and shirt. She carries an iron longsword and a netch leather shield for self-defense.