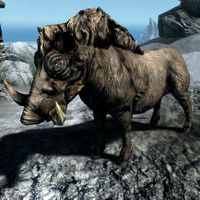 Boar Tusks are ingredients dropped by bristlebacks and rieklings.

15 guaranteed samples can be found in the following 2 locations:

Bristlebacks will nearly always drop either a boar tusk, boar meat or both. Other than Bristleback Cave, the best location to find bristlebacks is Castle Karstaag Caverns.

This Skyrim-related article is a stub. You can help by expanding it.
Retrieved from "https://en.uesp.net/w/index.php?title=Skyrim:Boar_Tusk&oldid=2109698"
Categories:
Hidden category: