The UESPWiki – Your source for The Elder Scrolls since 1995
< Skyrim: Magic: Spells
Jump to: navigation, search 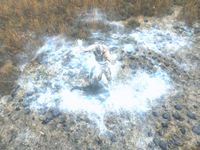 The effect of Unbounded Freezing on the caster

A freezing wind envelops the caster, knocking down nearby enemies and freezing them for 50 points of damage per second to Health and Stamina.

Unbounded Freezing is an expert level Destruction spell that surrounds the caster in an icy wind, knocks down targets within melee range, and deals 50 points of Frost Damage per second to the Health and Stamina of targets. Continuing to channel the spell will freeze enemies as they are knocked down, and only when the caster stops channeling within range, will they be thawed and return to a standing position.

†Note that this asset is a separate spell rather than an effect, which allows for the grouping of the following effects.