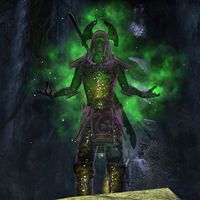 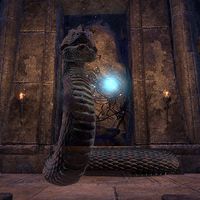 The Serpent's snake form in the Ruins of Kardala

The Serpent is a constellation that has fallen to Tamriel as a Celestial and now seeks to corrupt the other constellations and remake Nirn. He has taken over the minds of two of the Guardian Celestials, The Mage and The Warrior, with only The Thief escaping his grasp. He commands the Scaled Court, a group of fanatics operating in Craglorn that worship him.

Once the apex stone is cleansed, a projection of the Serpent appears and addresses you:

The Serpent: "You have purged my venom from the Apex Stone. Clever. Too clever for a mortal. She helped you, didn't she? I can smell her fear upon you. No matter. I will find her and consume her in time, just as I have her fellow guardians.
The Serpent: "Do not think you have succeeded here. The damage remains. The Warrior has fallen from the sky and is trapped in mortal form. He is mine."

The Shattered and the Lost[edit]

When Valla shows you a vision of the Mage and the Serpent:

The Mage: "You won't win, Malazar. I am too strong for you!"
The Serpent: "You underestimate me, Valla. I have more tricks at my disposal than you could ever imagine. I have drawn you out of your Apex Stone and made you vulnerable. I know the power you wield. I am not fool enough to try to swallow you whole. But a piece at a time …."
The Mage: "I will not let you do this. I will stop you!"
The Serpent: "Protest as you will, but I have already won."

When walking through Sanctum Ophidia, the Serpent will address you and your group by saying the following in this approximate order:

He will first address you when you enter the Sanctum:

On veteran, when you burn the Nirncrux Braziers:

The Serpent: "No! How dare you undo the work of my brood? Kill them!"

After you slay the Possessed Mantikora:

As you approach the bridge:

The Serpent: "Your end is imminent. The Stonebreaker will show you."

Once the troll is dead:

The Serpent: "I see troll blood has thinned in the modern era. You will die for this! I promise you!" 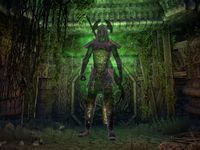 The Serpent taunts you, fearing how far you've come

Entering the hallway before Ozara:

The Serpent: "I will not be contained! Do you understand me? Not by the Celestial Guardians. Not by you."

The Serpent: "Burn them, Ozara! Burn them to ash!"

When you reach his Inner Sanctum:

The Serpent: "I tire of this. You will never leave the inner sanctum alive!"
The Serpent: "You have come far—only to die on my sword."

The Serpent: "No! The mortals must perish!"
The Thief: "Serpent! I've ensured you will never return to this plane. When the Mage and the Warrior are freed from your influence, you will answer for their entrapment."

The Serpent: "No! The mortals must perish!"
The Mage: "The Serpent could not break this new seal with the blood of a thousand mortals. He will never return to this plane."
The Thief: "The Warrior remains in his thrall. Even alone, that one will cause untold peril if left unchecked."

The Serpent: "No! The mortals must perish!"
The Warrior: "It is done."
The Thief: "Even the two of us could not break this new seal on the Stone. The Serpent will never enter this plane, again. Let us depart—the Mage remains in the Serpent's thrall."

The Serpent: "No! The mortals must perish!"
The Warrior: "It is done."
The Mage: "The Serpent could not break this new seal with the blood of a thousand mortals. He will never return to this plane."
The Thief: "But his attention will wander elsewhere. We should depart." 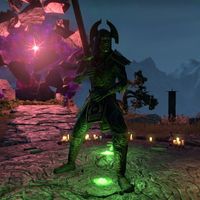 The Serpent fights you at his last stand

Should you die, he will say one of the following:

This Online-related article is a stub. You can help by expanding it.
Retrieved from "https://dev.uesp.net/w/index.php?title=Online:The_Serpent_(Celestial)&oldid=2058562"
Categories:
Hidden categories: