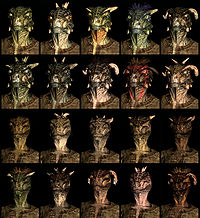 A compilation of the preset Argonian faces available in Skyrim

Argonians are the reptilian natives of Black Marsh, a vast swampland province in southeastern Tamriel. Argonians are a hardy race with scaled skin, sharp claws, horns and raspy voices. Their scales can appear in a variety of hues, including (but not limited to) green, brown, black, red, blue and white. They are known for their resilience, which is embodied by their resistance to disease. In addition to this resistance, they possess the ability to breath underwater and a penchant for stealth. Large bodies of water are no obstacle for an Argonian.

They sometimes face prejudice in the land of Skyrim, as they look vastly different from the other humanoid races of Tamriel. The term "lizard" is often used as an insult towards Argonians.

This reptilian race, well-suited for the treacherous swamps of their Black Marsh homeland, has developed a natural resistance to diseases and the ability to breathe underwater. They can call upon the Histskin to regenerate health very quickly.

Argonians make good thieves, as they have the right stat boosts. The underwater breathing makes them good underwater treasure hunters and fishers; it also provides them with a good way to escape enemies by swimming. A +5 boost to Alteration and Restoration gives them good magical potential. Their claw bonus also helps them win brawls.

Their Histskin power plays a vital role (particularly in early gameplay), saving players from near death against more powerful opponents by making them essentially invincible for a minute.