The UESPWiki – Your source for The Elder Scrolls since 1995
< Skyrim: NPCs
Jump to: navigation, search 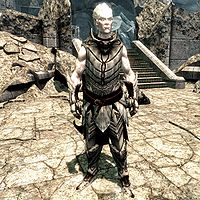 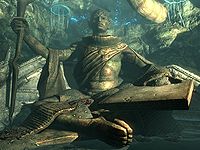 The Great Statue of Irkngthand, a rare depiction of a Snow Elf

Snow Elves (also known as Ancient Falmer to distinguish them from their devolved modern counterparts) are a largely extinct race of mer that once inhabited the province of Skyrim. They are very similar to the Altmer in appearance, though are slightly shorter, have blue eyes, white hair, and bluish-pale skin. They worshiped Auri-El and built the Chantry of Auri-El and various wayshrines in the Forgotten Vale. Following their defeat at the Battle of the Moesring, Snow Elves were the victims of a genocide by the Atmorans that left their numbers significantly low. Many took refuge with the Dwemer, who in exchange for protection forced them to eat a toxic blinding fungus that turned them into the twisted and primal modern-day Falmer, known by surviving Snow Elves as "The Betrayed".

There are a total of seven snow elves; only Gelebor is unaffected by a form of undeath, as Vyrthur is also a vampire and the prelates are ghosts. They are all in the Dawnguard add-on.