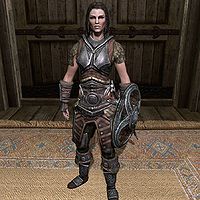 Lydia in the Dragonsreach main hall

Lydia is a Nord warrior living in Whiterun. She is likely to be your first housecarl, which she becomes after you are titled a thane of Whiterun upon completion of the Dragon Rising quest. If she is not following you, she resides in the main hall of Dragonsreach, although if you purchase Breezehome, she will move there.

Lydia wears steel armor, with steel Nordic gauntlets and steel cuffed boots. She wields a steel sword and shield, and is also equipped with a hunting bow as a follower.

With the addition of Dragonborn, Lydia becomes much more expressive than she was previously, with new unique dialogue.

This Skyrim-related article is a stub. You can help by expanding it.
Retrieved from "https://en.uesp.net/w/index.php?title=Skyrim:Lydia&oldid=2115584"
Categories:
Hidden categories: