The Clockwork City, also known as Sotha Sil, after its creator, is said to be a great and intricate mechanism that duplicates the mythic structures of Nirn in metallic miniature. Only Seht himself knows its true purpose. 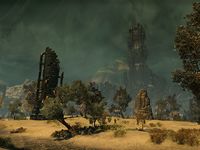 Clockwork City is a mechanical realm created by Sotha Sil, one of the living gods of Morrowind. It supposedly exists "outside space and time", represented in Tamriel as a miniature realm within a globe about the size of a large crate, requiring an individual to be magically shrunk to enter. The globe is located in a vault in the Dwemer ruin of Bamz-Amschend, deep beneath the Tribunal Temple in Mournhold. The location serves as the setting of the Clockwork City DLC, although some parts of the city can also be visited in two quests available in the Morrowind chapter of ESO; the Halls of Fabrication and the Clockwork City Vault.

Note: This article is a stub. You can help by expanding it.
Retrieved from "https://en.uesp.net/w/index.php?title=ESO:Clockwork_City&oldid=1787155"
Categories:
Hidden categories: