The UESPWiki – Your source for The Elder Scrolls since 1995
< Online: Quests: Glenumbra / Prologue Quests
Jump to: navigation, search

I received an enchanted stone from the Mages Guild that contains an important message from Vanus Galerion.

After accepting the quest from the Crown Store, a Mages Guild Message Stone will appear in your inventory. Activating this will summon a projection of Vanus Galerion, the Great Mage of the Mages Guild who is in need of your helping following a rather unsettling prophecy that mentions you by name directly.

Head to the Mages Guildhall in your Alliance's starting city where you will discuss the situation with Vanus Galerion in person (you can also accept the quest directly from Vanus there, instead of accepting it from the Crown Store). He tells you that the seer who made the prediction, a one Oracle Marieve, is no longer responding to his projections and he fears that she is in grave danger. He also mentions that she predicted you would be the one to save her too.

Vanus points you towards Oracle Marieve's campsite, which can be in one of three locations, depending on your Alliance:

Bangkorai. You can get there by using an enchanted boat that Vanus has kindly given you use of. By the time you arrive at her reclusive retreat the surrounding area has been overrun by hostiles. Fight your way through to the campsite. There's no clues but luckily one of Oracle Marieve's Wyrd sisters, Wyress Aelynn, is there.

She will tell you that there is an old Wyrd site in the Mines of Khuras in Glenumbra where she may be, as it makes for a good hiding place.

Take the enchanted boat which will plop you right outside the delve entrance. Fight your way through to the well hidden alcove deep in the mines. In the boss area you will find a small tunnel, with green vegetation on it, you need to take to actually find the oracle. It is on the right side if you face the boss. Very easy to miss!

Watch out though, there is a Wraith-of-Crows—one of Nocturnal's powerful minions—who will eviscerate an unwary player if they aren't expecting it.

You'll come to a small inlet. Read the Note to Vanus to be able to summon Vanus Galerion to your location. He will muse that it looks like a ritual was hurriedly left for one to perform should they wish to speak to the Oracle.

Its a very uncomplicated ritual to perform as well. Collect a feather, a gourd full of water, and an uncut gemstone and place them in bowls with primitive pictographs etched on the base. There are no repercussions should they done incorrectly, but here is the solution:

This will summon a projection of the Oracle who reveals she has been captured and is currently being taken to the ruins of Bewan in Auridon. You must leave the ruins and once more take the enchanted boat to the ruins of Bewan. Luckily you can use a raised ledge to avoid the Wraith-of-Crows should it have respawned.

Fight your way through or sneak through the Sea Vipers there and head to the library chamber at the southernmost point of the ruin. 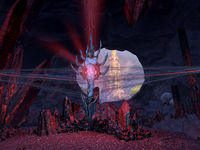 As soon as you get to the library, Viscount Lelorion snatches the Oracle and pulls her through the portal to The Spiral Skein, Mephala's web-filled realm. You must follow suit where upon you will end up in the same place. Follow the corridor, fighting the many spiders that Viscount Lelorion unleashes on you as you make your way through the halls. He will taunt you throughout but you will finally make it to the entrance hall and must fight Viscount Lelorion before you can progress.

After that speak to Oracle Marieve who will explain just why Mephala abducted her and tells you that you need to destroy the binding pinions currently being used by her minions to release her.

You will need to defeat both Weavers Ulfaduug and Gwaumanus and destroy the pinions they are guarding. They are both Spider Daedra with no special abilities and have quite large areas to fight in, so feel free to move away from the narrow ledge edge to avoid being trapped or falling down.

Once that's done you need only smash the center fulcrum to release the Oracle. She will use residual energy to open a portal back to Skywatch through which you must go.

Once you pop back, all you need to do is talk to Vanus Galerion who thanks you for recovering the Oracle and stopping Mephala's plans. He promises to show Marieve the hospitality of the Mages Guild and will reward you with the Wyrd Elemental Orb for your efforts.

If you want to speak to Oracle Marieve now is the time to do as she will not be present in the game world after you've left the area.