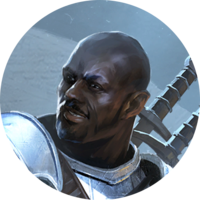 The Thornwell Farm is a location available in The Lost Treasure. It is one of the two initially-available locations, along with the Ragged Flagon. After trailing the treasure hunters to the location, you and Swims-at-Night will have to intercede on an old man's behalf. Once you complete it for the first time, you'll receive playsets of Relic Hunter and Ratway Prospector.

Relic Hunter: "I'm warning you, old man. Give us the magic ring, or this might get ugly."
Old Man: "Please, no! You don't understand, I need it! You there, stranger — please, help me!"

Old Man: "The gods bless you. In truth, I don't even have that magic ring anymore — I lost it in the woods over yonder. If you find it, I beg you, please return it. It's precious to me.

As midrange and control decks tend to rely on maintaining a certain measure of card advantage, this battle's conditions can be anathema to typical decks of those styles. As such, an aggressive or otherwise fast-paced gameplan is advised for this battle.

UESP has included an example deck for this battle, effective in both normal and Master modes. The cards in the example deck have been chosen due to affordability and utility in the scenario. Its gameplan is to seize control of the Surplus Lane to rapidly empty its hand every turn, triggering the Harvest support. Once it has filled the Surplus Lane and expunged the opponent's creatures from it, it has the utility of being able to continue on in it or to begin claiming the Shadow Lane, which at that stage in the game will already be occupied by the opponent (provided one was able to secure the Surplus Lane)—though players should be wary of forgetting to empty their hand each turn. It is not imperative to empty one's hand in the first three turns, though it is important to note that it is optimal to begin doing so before one's opponent is able to do the same. It is important to note that the opponent can rapidly snowball in the Shadow Lane if it is not engaged in a fight for board control, so if it manages to Snowball it is crucial to recognize which degree of aggression or defense is necessary to win.