The UESPWiki – Your source for The Elder Scrolls since 1995
< Oblivion: Disease
Jump to: navigation, search

This article is about the disease Vampirism, in particular the effects it has on the player. For NPCs who are vampires, see Vampire. 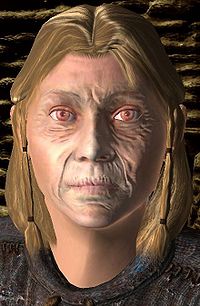 Facial image of a Vampire

In Oblivion, vampires are people infected with Porphyric Hemophilia, an unusual disease. You can become a vampire—either by choice or by accident—and can subsequently be cured. In addition, vampiric NPCs will be encountered, both friendly and hostile.

Unlike previous Elder Scrolls games, you can pass as a living mortal; citizens and the Imperial Guard will not attack you on sight if you are known to be a vampire. Yet, also unlike previous Elder Scrolls games, there are only two quests relating to your vampirism, one in which you become a vampire and another in which you obtain the cure for vampirism. There are also no vampire clans that you can join, nor can you associate with or avoid being attacked by vampire antagonists. However, you can perform The Order of the Virtuous Blood quest while you are a vampire.

Regardless of your level of vampirism, you acquire 100% disease resistance and 100% resistance to paralysis. The other advantages and liabilities of vampirism vary depending on how long it has been since the last time you fed on another humanoid.

Unlike most skill boosts, these skill increases are implemented as abilities and therefore they increase the base value of your skills. One effect is that you gain skill perks, such as the ability to cast more powerful spells. See the section on skill boost abilities for other advantages.

The abilities gained are: 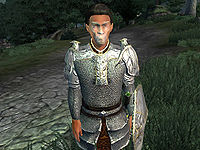 A Redguard NPC with a lightened complexion 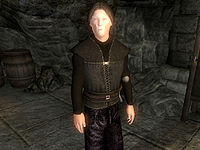 Once initially contracted, Porphyric Hemophilia will not take effect until three days have passed, at which point sleeping will trigger the full change into a vampire.

Note that at least for the first night of sleep, if you are also due to level up, sleeping will only trigger vampire skills. A second nap will be necessary to increase your level and increase your attributes.

For the first 72 hours after being infected with Porphyric Hemophilia, the condition is subject to the rules which govern any other disease, and can be cured in the same fashion. If you become infected and do not wish to become a vampire, you must drink a potion, eat an ingredient (e.g. Mandrake Root or Shepherd's Pie), or cast a spell which cures disease. Alternatively, you could go to the nearest temple and receive a blessing at the chapel altar. If you do not cure the disease within three days, however, you can no longer be cured. At that point, the only way to prevent becoming a vampire is to avoid sleeping for as long as possible. 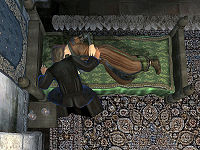 Vampire feeding on a sleeping target 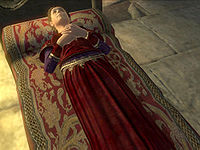 Rona Hassildor in her coma

If someone else witnesses a feeding, it will be reported as a crime with a bounty of 40 gold (it is treated as an assault). Being caught by someone else while feeding also wakes up the victim. Feeding does not kill or harm the person, and they are not turned into vampires. One thing to keep in mind is that NPCs will not be awoken by your presence if you are not trespassing. Public areas such as guild halls are a great place to feed because you can simply walk in without fear of being chased away. Being stealthy while feeding will rarely result in the humanoid waking up, with the exception of Imperial Guards. Guards seem to often be woken up to the feeding and attempt to arrest you as a result. Guards can be avoided as they offer no special feeding bonuses; feeding on any humanoid will garner the same results.

Do note, however, that feeding on other vampires is impossible. Attempting to feed on another vampire will not get a feeding dialog box, but instead the vampire will simply react as though feeding was never attempted. They will wake up for conversation if you are not sneaking, or you will enter the pickpocketing screen if you are sneaking.

Some easy ways to feed are:

Advancing Through Stages of Vampirism[edit]

While you are a vampire, you are always at least at 25% vampirism. To see this, you can open your Journal, select the Spells/Abilities section and then select the far right Active Effects tab. There should be an effect labeled Vampirism and its number should be at a minimum of 25.

You advance through the stages of vampirism during sleep or waiting. After 24 hours without feeding, you will advance another 25% in vampirism the next time that you sleep/wait. You need to sleep or wait to trigger the advancement - the fundamental passing of time is not enough. Note however, that you do not have to pass time in order to trigger the advancement. In other words, if ≥24 hours have passed since your last feeding, you can just start the wait and cancel it immediately.

The effect of spending long periods of time without feeding, waiting or sleeping has its downsides. Even if you feed, the next time you sleep or wait you will still advance in vampirism (as if your advancements in vampirism were queued-up). This game of catch-up does not seem to last very long, however. In theory, if you were to stay awake a month or just a week and not feed, the catch-up time would be the same either way. In any case, you can simply counter this problem by repeatedly feeding on the same person several times consecutively until you're clear again.

As you progress through the stages of vampirism, you become more and more light-sensitive. You will notice that light glares more and more, especially when there is a great deal of light around you. At night or in the dark, this can actually help you to see things better if you have a video card with the supported shaders. However during the day this can make it difficult to see the details of anything except when underwater.

Note: After reaching 100% vampirism (not drinking blood for 72+ hours and then sleeping), you will still revert back to 25% vampire if you drink blood. You will lose the abilities granted by full vampirism but retain the abilities of one being 25%. You will lose a considerable Strength bonus, so exercise caution if you are close to your maximum encumbrance limit. This cycle can be repeated as often as necessary.

In the base game, curing vampirism involves a lengthy quest. Once cured, it is not normally possible to become a vampire again (except via console commands), even though Melisande says that her services will be available if needed in the future. You still can contract "Porphyric Hemophilia" normally after that, but it behaves just like any normal disease then - drain fatigue 5 until cured, without any special effects from sleeping.

The Vile Lair official download has a Font of Renewal that can cure vampirism much more easily than going through the Vampire Cure quest. Just like with the standard vampire cure, you cannot become a vampire again after using the Font to cure your vampirism.

Becoming a Vampire Again (After Being Cured)[edit]

Although it is still possible to contract Porphyric Hemophilia after being cured, a character can never become a vampire again without the use of a mod or the console. This is due to the fact that either method of being cured of the condition sets pcvampire and vampire.hasdisease to -1. Since you cannot have porphyric hemophilia twice at the same time, this value can never reach 1. Prior to being infected they are both set at 0 and this is what allows the transformation to take place. There are several mods that change this, and different ways of doing it via the Console.

Curing Vampirism With the Console[edit]

Give yourself the Cure Vampirism potion by typing the following Console command:

This will make you immune to reinfection through normal means though, so if you plan on getting reinfected it's advisable to use a different method from Console Command Tutorial Section.

If the potion does not remove your abilities see the appropriate Console Command Tutorial Section.

In order to become a vampire again through being infected with Porphyric Hemophilia simply type the following into the console, Set PCVampire to 0 and Set vampire.hasdisease to 0. Thereafter you will be able to become a vampire through any of the normal means within the game.

To infect yourself and become a vampire more immediately, enter the following commands into the console: Set PCVampire to 1 and Set vampire.hasdisease to 1. After you sleep or rest you will be at 25% vampirism the same as if you had been infected normally and waited 72 hours.

Female players can fix their gender by using the Console to enter the command sexchange twice.

If this does not work as is the case with the bug where using the command sexchange will cause the head to disappear altogether instead of reverting to female, enter the command showracemenu into the console. Adjust your characters appearance to female and then save the game before hitting "done". Load the game you just saved, and your female pc will look female again.

If your vampire breaks (e.g. frozen progression, extra powers, infinite dream loop, etc.) it can usually be fixed by entering the following into the console:

After entering the above, feeding will reset your powers to 25% vampirism. If this doesn't help cure and then regain vampirism as suggested in Console Command Tutorial Section, Method 2 for both.

As you progress through the various levels of vampirism (25%, 50%, 75%, 100%) you will have nightmares. The first nightmare you experience (changing from non-vampire to 25% vampirism) is always the same. At any other transition you will randomly experience one of ten possible nightmares: 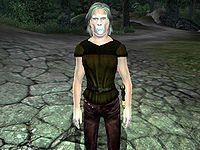 A female victim of the elderly male face bug
Retrieved from "https://en.uesp.net/w/index.php?title=Oblivion:Vampirism&oldid=1973872"
Categories: