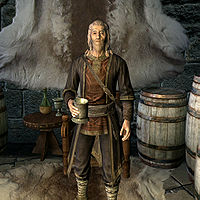 Tolfdir in his room at the College of Winterhold 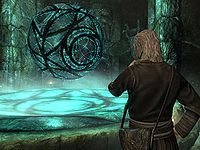 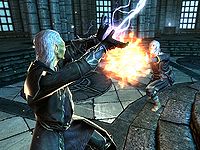 Tolfdir is an elderly mage who lives in the College of Winterhold. He is a professor and serves as the quest giver for the first few quests of that faction.

After the quest Under Saarthal he will most likely be found in the final chamber of Saarthal, studying the Eye of Magnus. Later, after starting Hitting the Books, the Eye and Tolfdir will move to the Hall of the Elements. After The Eye of Magnus quest is completed, he is usually found in the Hall of Attainment. His room is the first to the left from the entrance on the ground floor.

Tolfdir wears master robes of Alteration and a pair of boots. He knows the Alteration spells Ironflesh and Stoneflesh, the Destruction spells Fireball and Flames, and the Restoration spell Steadfast Ward.

This is the merchandise found in Tolfdir's merchant chest. These items are only available if purchased from the merchant; they cannot be pickpocketed or stolen. They are restocked every two days.

This Skyrim-related article is a stub. You can help by expanding it.
Retrieved from "https://en.uesp.net/w/index.php?title=Skyrim:Tolfdir&oldid=1567378"
Categories:
Hidden category: