The UESPWiki – Your source for The Elder Scrolls since 1995
< Lore: People: M
Jump to: navigation, search

This article is about the historical figure. For the book, see Mannimarco, King of Worms.

"In time, the name Molag Bal will be forgotten! In time, all of Tamriel will bow down before me! Soon, the God of Schemes will have a new name: Mannimarco!"

Mannimarco, an Altmer lich, is the leader of the Order of the Black Worm and an enemy of the Mages Guild. He is also known as the King of Worms (also styled King of the Worms), though it is unknown whether that title is specific to him or if he holds it as the leader of his cult of necromancers. He has been involved in several major events in Tamriel's history.

What is known of Mannimarco comes from books which tell a great deal not only about him, but about the time periods and Galerion.[1]

Mannimarco experienced the Dragon Break of the Middle Dawn (1E1200-2208), where he learned "his mystery" from the Maruhkati Selectives.[2]

He was studying among the Psijic Order around the year 2E 230.[1] He was said to be highly intelligent, as was his fellow student Vanus Galerion, founder of the Mages Guild.[3] Galerion had a "light and warm" heart, while Mannimarco unsurprisingly had a "dark and cold" heart.[1] Mannimarco used necromancy and trapped souls even while studying.[1]

Galerion eventually confronted Mannimarco about his use of necromancy[4]. He ignored Galerion's warning, and was exiled from Artaeum by the Order as a punishment for his dark interests. He spent the next several decades gathering followers and spreading his vile practices.[5][1][3]

Mannimarco's evil began spreading throughout Tamriel and he gathered a following of Necromancers,[1] which would come to be called the Order of the Black Worm. He is described in a poem as "world's first of the undying liches",[1] despite the fact that there had been many immortal liches before him.[6][7] He lost his body and mind; he became a living, moving corpse. His blood became acid, and all manner of repulsive things happened to him, and he took on the title "King of Worms".[1]

Around 2E 578, Mannimarco was one of the original Five Companions whose goal was to find the Amulet of Kings to give their leader Varen Aquilarios legitimacy as Emperor of Cyrodiil. After they found the amulet in Sancre Tor, Mannimarco tricked them into using it to cause an event known as the Soulburst. The Soulburst would allow Molag Bal to merge Nirn into his realm of Coldharbour, forever placing it under his control. Mannimarco, however, was secretly planning to use the Amulet to capture Molag Bal's essence and take his place as a god. However, one of the Five Companions, Sai Sahan was able to take the Amulet and returned it to Sancre Tor, where he hid it behind a ward of Stendarr. In 2E 582, Mannimarco uncovered the Amulet's location, and went there to retrieve it. He would there go on to be defeated by the Vestige, with whom the Five Companions had been reformed. Mannimarco's soul was taken by Molag Bal to Coldharbour, where he was tortured for his treachery; but Mannimarco was able to escape and returned to Tamriel.[7]

Some time later Galerion left the Mages Guild, having previously called it "a morass" of political infighting and tortuous bureaucracy;[8] but he continued to struggle against Mannimarco and his Worm Cult. Galerion led the Mages Guild in an attack on Mannimarco in a great battle. Mannimarco began to unleash powerful death spells. However, he felt his depraved powers fail, and the battle was won by the Mages Guild. Approximately a thousand men total died in the battle, Galerion included, and it appeared that Mannimarco had died as well.[1]

The Warp in the West[edit]

Due to reports just before the event known as the Warp in the West regarding Mannimarco's growing power and machinations around Iliac Bay, it is highly suspected that he was involved in whatever phenomenon took place. In fact, that event has cast so much confusion into history that it is unknown whether there has been just one Mannimarco. There's some speculation that encounters with the King of Worms since the Warp were merely with a possessed vessel or another necromancer who took the name for effect. Some even suspect that Mannimarco ascended into godhood after the Warp. It was rumored, after the correspondence of a Worm Anchorite was circulated, that the Necromancer's Moon is the God of Worms- a heavenly body that eclipses Arkay and allows soul gems to ensnare those usually protected by the Divine. It boasted that this moon is the remnant of Mannimarco's apotheosis, and his divine form.[9]

The Attack on the Mages Guild[edit]

Despite Mannimarco's great age, only a few artifacts have been identified by scholars as belonging to him. 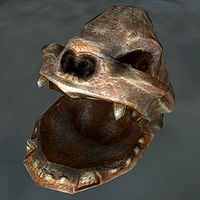 The Bloodworm Helm is an evil trollbone helmet created by Mannimarco, the King of Worms. Although beautiful to behold, many find the artifact repulsive due to its necromantic nature. The helm grants the wearer greater skill at Conjuration, as well as the ability to turn the undead, drain the essence of enemies and summon a skeletal minion from the Soul Cairn. Mannimarco left the helm behind when he ascended to godhood during the Warp in the West. 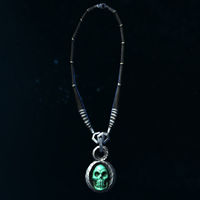 The Necromancer's Amulet (also known as the Necromancer Amulet) is a legendary artifact created by Mannimarco. In appearance it is an exquisite amulet, often with a skull emblazoned upon it, or sometimes carved into the shape of a tiny skull with glowing eyes. It grants the wearer magical protection equivalent to plate armor, as well as the ability to regenerate from injury, resist mundane weapons, and absorb magicka and life force. The wearer also becomes wise beyond his years and far more capable in the School of Conjuration. This comes at a price, as the amulet can drain the wearer's strength, endurance, health and stamina. The artifact is popular among both thieves and mages. The amulet is unstable in this world, and is forever doomed to fade in and out of existence, reappearing at locations distant from that of its disappearance. 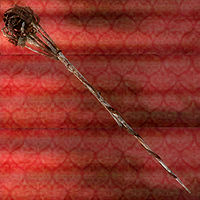 The third known treasured artifact of Mannimarco is the Staff of Worms, a powerful and dreadful staff which will "reanimate" a corpse for thirty seconds. This animated corpse remains mute and shows only minimal intelligence, but it unswervingly follows and defends the caster.