The UESPWiki – Your source for The Elder Scrolls since 1995
< Lore: Gods: N
Jump to: navigation, search

Namira, the Lady of Decay, is the Daedric Prince whose sphere is the ancient darkness.[1] She is known as the Spirit Daedra, ruler of sundry dark and shadowy spirits, and is often associated with spiders, insects, slugs, and other repulsive creatures which inspire mortals with an instinctive revulsion.[1] Namira also appears to be associated with beggars and the beggaring gifts of disease, pity, and disregard.[2]

Her enemy is Ebonarm and her summoning day is Marukh's Day. Her followers and the priests of Arkay are often at odds.[3][4] Namira and her shadowy endeavors are often recognized to bear some association with eternity.[5]

She is known as Namiira to the Khajiit, and is also called the Great Darkness, The Eldest Spirit[6] and The Void.[6] The Khajiit believe she bears a connection with Lorkhan.[7] The Dro-m'Athra are associated with Namiira, and they reside within the Dark Behind the World, which is Namiira's domain. An unusual increase in the presence of weevils, locusts, slugs and other bugs harmful to crops is a sign that a source of Namiira's corruption is nearby.[8] Giant spiders and hoarvors also tend to spill out from the Dark Behind the World in places where the Great Darkness' presence is pervasive.[9][10] 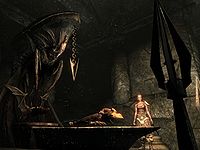 A sacrifice for Namira's cannibal feast

"I feel the hunger inside of you. Gnawing at you. You see the dead and your mouth grows wet. Your stomach growls. It's all right. I will not shun you for what you are. Stay. I will tell you everything you have forgotten." — Eola, inducting a new member to Namira's coven[11]

Namira worshipers are rarely open about their beliefs, as they would be viewed as dangerous and perverse by society. They often live normal lives, working standard jobs and socializing with fellow civilians as anyone else would, and organizing into secret covens to hide their unconventional appetites.[4] Namira's followers keep to themselves, some preferring to live peacefully in dark and squalid conditions, though they will react violently at any attempts to "save" them from their lifestyles. Those who devote their full time to Namira can be found congregating around her shrines or forming colonies, such as the Forgotten Ones, deep within abandoned ruins.[3] Their behavior has even involved ritualistic murder and cannibalism.[4] Her followers and the priests of Arkay are often at odds.[3][4]

In the First Era, two Chimeri mages that worshipped Namira had created a powerful weapon against the Dwemer called the Spellplague. But when it was revealed that the Spellplague was too powerful to be controlled, the Chimeri Lords had sealed both the plague and the two Mendicants into a vault, which would become Heimlyn Keep. The two were sealed ever since, falling into obscurity.[12] The curse began to re-surface in 2E 582, with its mystical corruption emanating from a Telvanni reliquary, but was put to a stop before it could spread past the Keep.[13]

Sinweaver is a possible artifact associated with Namira.

The Ring of Namira is usually bestowed on those who gain Namira's favor by performing a great feat in her name. The Hero of Daggerfall was blessed with the ring for dispatching an ancient vampire.[14] The Champion of Cyrodiil was likewise rewarded for helping her followers retaliate against those attempting to turn them away from her.[3] The Last Dragonborn was also given the ring for helping her secretive followers in Skyrim and becoming her champion.[4]

The Scuttling Void is a realm of Oblivion, ruled over by the Daedric Prince Namira. Sometimes called the Dark Behind the World by the Khajiit, very little is known of the realm of this shadowy Daedra.

Namira's servants, the Dro-m'Athra, originate from the realm. Somewhere deep within the realm, there are grim forges and bent benches where the Lost Cats dance and arm themselves.

When the seals in the Temple of Seven Riddles were desecrated by an abbot named Kulan-dro in 2E 582, the boundary between Mundus was torn and the Dro-m'Athra invaded the temple, before being banished once again by the Twilight Cantors and a group of adventurers.